Cheap Flights To Warsaw From USA

Expired Flights to Warsaw, Poland from $477 Roundtrip on SAS (US West Coast)

Expired Flights to Warsaw, Poland from $328 Roundtrip on SAS (US East Coast)

Expired Flights to Warsaw, Poland from $499 Roundtrip on American Airlines (US East Coast) 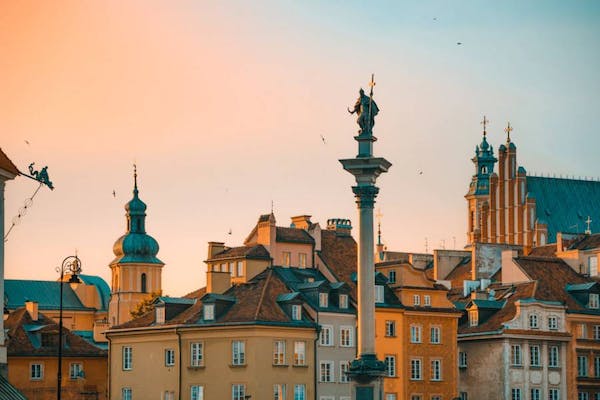 Expired Flights to Warsaw, Poland from $340 Roundtrip on SAS (US West Coast)

Warsaw is the spear tip that's leading Poland headlong into the 21st century. Unlike Krakow and Gdansk before it, this one's proudly modern. Shiny skyscrapers gild the skyline, hipster districts like Mokotow brim with ruin bars, and Michelin-rated restaurants huddle by the edges of the Vistula River. But you shouldn't have to look too far for history. Sobering museums chronicle the struggles of WWII, there's a grand Old Town area of medieval guild houses, and the tall monuments of Lazienki Park await. Cheap flights to Warsaw from USA are usually the best bargain tickets from the stars and stripes to Poland. You can go direct, though the lowest-cost deals are often on routes that include a single stopover.

Palace of Culture and Science

The Palace of Culture and Science crowns the Warsaw skyline with its 237-meter spire and Art Deco veneer.

Start by gazing at the huge statue of Chopin in Lazienki Park. Then, move to the Chinese gardens and the tree-lined walking paths.

What airlines fly non-stop to Warsaw?

LOT Polish Airlines fly direct from the United States of America to Warsaw.

What is the best airline to fly to Warsaw?

Qatar Airways is the best airline to fly to Warsaw from the United States of America. LOT Polish Airlines is the best if you would like non-stop flights. Norwegian is the best budget airline.

I Know The Pilot finds you the cheapest Warsaw flights

At I Know The Pilot we are always looking out for cheap flights to Warsaw. As soon as we find a good deal, we post it to the website and our apps. These cheap prices to Warsaw on are very popular and can dissappear quickly. Subscribing Is the only way to make sure you don't miss out.